What can I say? You guys and girls rock!

There's a point in any creative process when you have to look yourself in the mirror and say, "Is this really something I want to do? Do I want to put my vision out there and see how people react to it?"
I talk about this a lot with my friends. Success, failure, apathy - it takes a thick skin to work in any field where Mr. Aaron Nonymous can go in the internet and say that someone should be shot in the face for a creative venture. (for those that don't know, I produced DEER CROSSING)
And there's only one time when you truly know if things are going to work or not - zero hour, when the clock finally hits the time of a sale/film release date/what have you and people can experience what you have worked for months/years/decades on.
This past Friday was one of those times.

I've previously related how long the process took from concept to prototype in-hand for Maxx and friends. We had a successful launch at NYCC 2013, followed by a solid sale of the Maxx Zero Origin Edition kit online soon after. Because of the way things work in this business, you are constantly making decisions when you are in the thick of the culmination of something you did months previous. For instance, I needed to place an order for Robo Force round 2 before we even knew what full sales were on round 1. We also had to come up with what the new paint applications would be, and how they would relate each of the characters that can be built with the kit.
So you have to roll the dice on quantities and deco, taking into account any number of different factors - other work at the factory, shipping times, holidays, other products on sale and how close those sales are to your sale, how much will new paint ops cost to implement, and so on. It's an interesting challenge. After discussing plans with Matt Doughty, there was no doubt in my mind to tie it to the November Glyos release (which turned into the December Glyos release, things being what they are). The reasons that Hun-Dred and Enemy are specifically in these colors will be revealed over time, but trust me when I say these colors were not chosen at random. Similar thought has been put into the next editions, which you should see around March 2014. 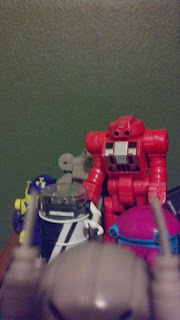 Above, see Maxx-X protecting some Zibits from another robotic entity you'll meet in 2014.
You could say he's a master of cruelty...and he's bigger than ever.

I want to personally thank everyone for coming out to the sale - our traffic was fantastic and your support is much appreciated. Toyfinity is just a couple of collectors who wanted to make the fun toys WE wanted for our shelves, so we do not take this support for granted. We'll continue to adjust quantities - the amount of kits available this time was over double what was available on the first edition - so we'll continue to search for the sweet spot that allows these to be in stock for more than a few hours.
I'm going to continue to push the deco until we are completely ready for the Classic and Ultimate Editions later in 2014. The Robo Force comic will continue - appreciate all the feedback!
Manglor development continues at a solid pace, and we hope to release them by NYCC 2014 at the latest.
Additionally, I have to thank my brothers in Toyfinity Charlie Parry and Mike Hart. Couldn't do it without you guys. Special thanks to Matt and the Onell team for their assistance and support throughout the whole project. Robo Force, one of the franchises voted Least Likely to Ever Return, is back and thriving due to your hard work.

Expect shipping notices to start later this week after Christmas. If there is any delay, I'll let you know here as soon as I know.

I recommend, in the meantime, that you support the upcoming release of the Godbeast's Kabuto Mushi figure. It's been a long time in the works - I have handled the figure multiple times now and can't wait to have some fighting alongside Maxx in his upcoming battles on my shelf!
You can even give Hun-Dred some insect minions, should you so choose to. 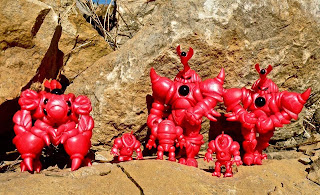 Hope to see many of you back here in a couple of weeks for the first-ever production GLOW IN THE DARK MORDLES! Geihoza lives!
Posted by John K. at 10:48 PM