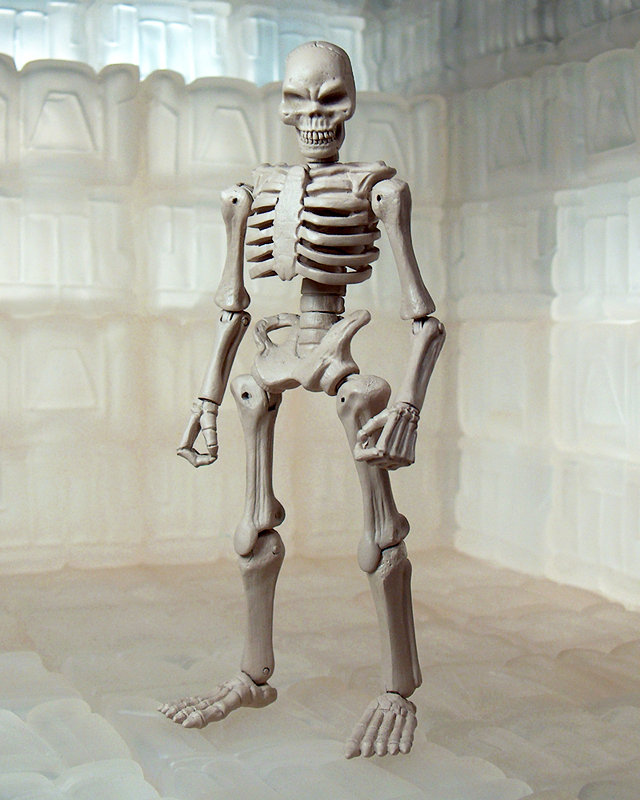 Congrats to October Toys on their successful Skeleton Warriors Kickstarter!
The Robo Force look forward to battling Titan Skeletons later this year.
A giant skeleton will also give you some interesting possibilities with the upcoming MANGLORS figures. 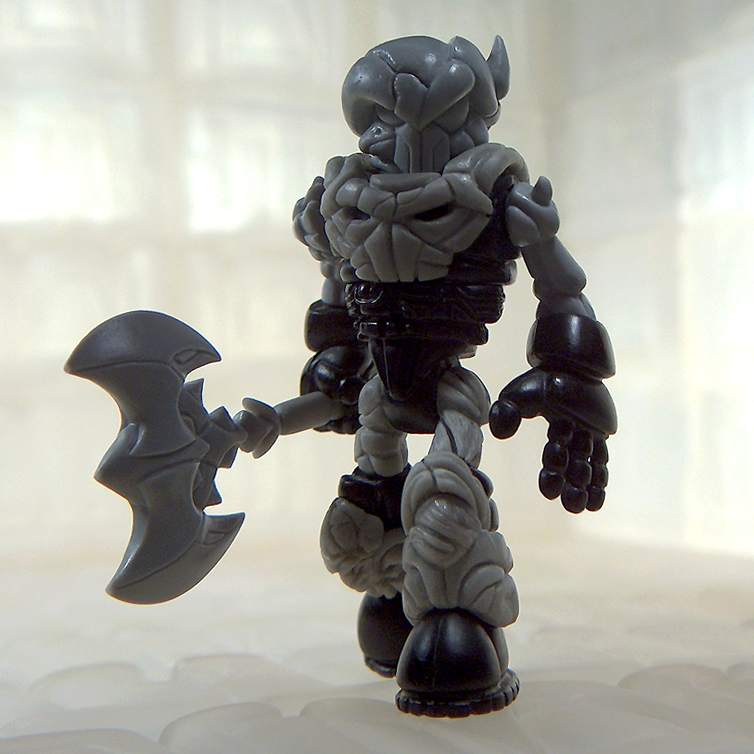 And additionally, it's awesome that Traveler Skeleden will be made as well!
He just looks like the type who'd be out there battling some Mordles, doesn't he? 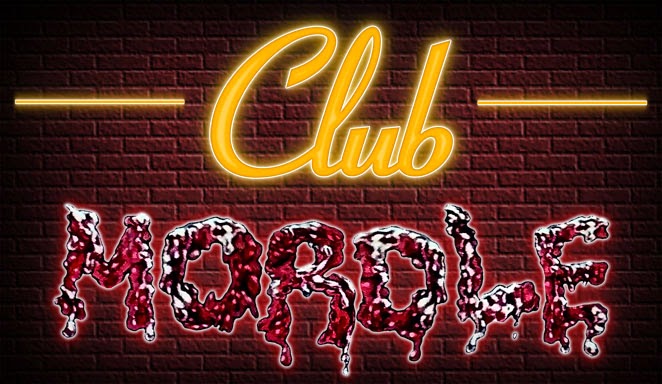 You have until Monday 11:59 pm to get your Club Mordle membership for year two! There will be no extensions. The first club sale begins next week! Club Members should look for an e-mail tomorrow with some details.

Finally, the Mordle and Robo Force sale for June has been bumped to July.
Sorry for the delay - when you see the figures and the amount of new paint on Vanguard, you'll understand!

It was not that long after the defeat of Rand by the Rampaging Storm that the first sighting had occurred.
Six Erixmes Mordles, not known for their reliability in conveying information, were chattering at their local Murlun Mordle council representative about a beast which walked the northwestern section of the Great Jungle after the sky darkened each day. This beast was sometimes shaped like an Erixmes, sometimes a Yorzwurl, changing as it walked...but always throwing off its own internal light as it walked through the jungle. The Erixmes friends made sure that they saw it at least ten times before bringing it to their Murlun - the incident with Rand had made most Mordles concerned about anything that was not commonplace, and doubly so of anything which might be related to the Imbalance of Blood.
It was also, off the council record, due to the Erixmeses sampling a large quantity of the Irximes berries, a delicacy that could only be harvested by the Erixmes species due to its appearance only in the tallest trees on Uzalek. These berries had a side effect of making any Mordle that consumed them hallucinate, so the already-hyper Erixmes buddies wanted to be absolutely sure that these beasts were real.
This illuminated beast had terrified the Erixmes so much, they could not approach it. Would not approach it. They could barely keep still as they described the scene.

The Murlun sighed, tired of these young Erixmes in his area. This was not the first time they had brought him some nonsensical story of beasts appearing at night. They had previously told him a large piece of stone cracked open and was full of teeth, snapping up a slow Caborux Mordle before disappearing into the ground. He was bound by Mordle law to investigate though, so during the next darkening of the sky, the Murlun set out for the area the Erixmes had described.
It was silent in that section of the Great Jungle. A majority of the Mordles lived near the center of the Great Jungle where the trees were not so densely covering the landscape; the northwestern corner had a very high density of foliage, making it difficult to navigate in darkness. The Murlun was not worried, as his species had a very good level of vision at night. He saw better in low light than most Mordles did during the time of the sun. Still, it had been a long time of darkness without any "beasts that glowed", so the Murlun was ready to head back to his tree.

It was then that he saw it. Moving through the trees just at the edge of his field of vision was a Rellun Mordle, illuminated as if he contained a pale sun inside him. The Murlun looked at this Mordle, and was surprised when he could not identify this other Mordle. My senses fail me, thought the Murlun. I should be able to look at this Rellun and know him - but I do not. The Rellun moved with purpose through the trees, not looking anywhere but directly in front of him. The Murlun followed him, slowly and carefully. The trek across the jungle continued for a short period of time before the Rellun ducked into a hole on a large tree. The Murlun followed, tentatively placing a foot inside the tree. The ground was solid; the interior of the tree was small, sealed. There was nowhere above him that the Rellun could have gone.

Free-fall was a unique sensation. The Murlun felt it, as the ground beneath his claws disappeared.
He tumbled into the darkness, his eyes trying to catch onto anything in this low-lit area.
Water broke his fall, deep. The Murlun used his claws to tread water. Softer ground slapped into his claws, bringing him to the edge of water. The Murlun looked around, finding himself in a giant underground cave. Tiny alcoves spread around the cave, their depth unknown from where the Murlun was situated. Suddenly there was a glow coming from one of the alcoves, then many of them. Glowing Mordles appeared in each alcove, staring down at the Murlun. His horror grew as he looked around - there were hundreds of them. And their glow allowed him to see that there was a much larger alcove, with a glow brighter than any of the other Mordles approaching the water.
"GEIHOZA." bellowed a voice from the alcove, the sound making the other glowing Mordles begin to dance in a strange fashion. "GEIHOZA."
The Murlun watched in horror as it appeared in the alcove, gigantic, terrifying.

It was the last thing that he would ever see.
Posted by John K. at 3:42 PM 2 comments:
Email ThisBlogThis!Share to TwitterShare to FacebookShare to Pinterest
Labels: geihoza, geists, zogg

CLUB MORDLE YEAR TWO is up and ready to go! 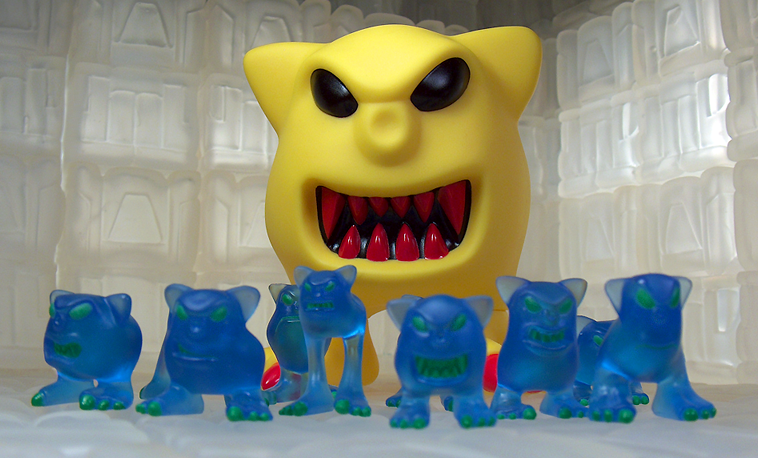 CLUB MORDLE YEAR TWO DETAILS!
PURPOSE: Club Mordle is here to evoke the memories of those classic fan clubs and membership packets from classic toy lines of the 1980s!
It also allows members to be guaranteed the chance to purchase at least one of each and every non-exclusive release MORDLES action figure, set, and accessory!

HOW IT WORKS: Toyfinity Toys plans to release a number of different Mordles related products in 2014, continuing through June of 2015.
The first release in this club term will be JUNE/JULY 2014.
To join Club Mordle, go to the Toyfinity store and purchase the Club Mordle membership. The cost of membership is $20 in 2014.
You'll be provided a special membership packet in a future Mordles product order (estimated shipping date: September 2014) that will evoke memories of the classic fan club kits.
There are no toy-based products included in the Club Mordle kit.
Members will have the opportunity to vote on at least one future Mordle colorway, as well as receive the hottest Mordle information before anyone else.
As we are going into our second year, it should be pretty clear what Club Mordle has to offer - including the VISION MORDLE program!
Because of the way the Mordle colors are chosen, there are times when "test shots" of colorways Toyfinity is not going to produce are created.
Instead of these laying around Toyfinity HQ, we pass them along to you!

THE SPECIFICS: Mordles love to hatch in groups! But sometimes, they hatch all by themselves.
As such, a release may consist of one single Mordle figure, Mordles with special Glyos accessories, or multiple packs of Mordles in special colorways or designs.
The cost for each Mordles product will vary depending on what is included in the product - number of Mordles, paint decos, and so on.
Unlike other subscriptions, Toyfinity Toys is NOT locking you into purchasing product blindly or guaranteeing sales to Toyfinity in advance (unless the item is specifically listed as a "pre-order").
Here's how the Club will work:
- Purchase the Club Mordle membership during the membership term, which is today through June 30th 2014.
- Toyfinity Toys will e-mail Club members with the e-mail address provided by your PayPal purchase of Club Mordle.
- Club Mordle members will be provided a link to the Club Mordle store. It will be open for approximately one week, with specific dates announced for each sale.
- Each member will be allowed to make ONE and ONLY ONE purchase PER MEMBERSHIP from the store during this time. You do not have to purchase every item! But you cannot update quantities once you check out. You are guaranteed to be allowed to purchase at least one of every item in the store, sometimes more as quantities allow. Limits will be listed when applicable.
- No product will be held for Club Mordle members beyond the date the store closes.
WHAT'S NEW?
- Club memberships are only available to US addresses. If you are a non-US person who wishes to join Club Mordle, please e-mail me.
- DEMANDED BY THE FANS! This year, you are allowed to purchase as many as THREE Club memberships. Each Membership will have its own Membership Number.
Each Membership is treated as a separate entity - combined shipping is not possible over multiple memberships purchased by the same person.
- Club memberships will run from June 2014 through May 30th, 2015.
And that's it! Enjoy the preview of the first release in June this year you'll have the first crack at getting, and see you in the Great Jungle!
Posted by John K. at 10:33 AM 5 comments:
Email ThisBlogThis!Share to TwitterShare to FacebookShare to Pinterest 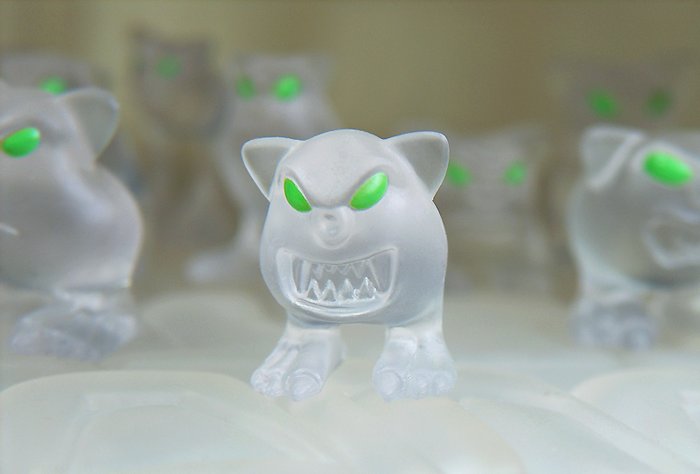 Exposure to this cloud would turn a Mordle completely transparent, rendering them invisible to sight and mental detection by other Mordles. A side effect - completely useful for once, instead of the insanity rendered by consumption of Mordle flesh to gain size and strength - was the ability of these Mordles to illuminate their eyes, making it easier for them to see in dark places. So far, one Zerak Mordle had survived the cloud, an accidental exposure - a carpenter Mordle named Dantusur. Zogg tasked Ardaan with taking a select group of twenty Mordle warriors to the cloud, giving him an invisible army of sentinels against threats to the Great Jungle.
Posted by John K. at 9:55 AM 11 comments:
Email ThisBlogThis!Share to TwitterShare to FacebookShare to Pinterest
Labels: club mordle, mordles year two

If you haven't already, jump over to the Godbeast's site and get some of the new Kabuto Mushi figures! They just launched last night, and you need some radioactive bug monsters in your toy collection! Make them fight Mordles! The Mordles need a warm-up with the Manglors on the horizon...


Also, if you didn't get some already, you need some Glyaxia figures from Onell Design: 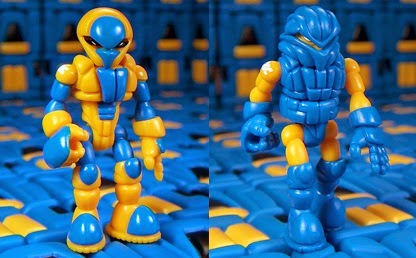 the next release of Robo Force will thank you for it! (late June)

Stay tuned this week for the roll-out of Club Mordle! We held it back for a reason...previews of the new wave you'll be guaranteed a chance at by joining Club Mordle.
Posted by John K. at 9:12 AM 2 comments:
Email ThisBlogThis!Share to TwitterShare to FacebookShare to Pinterest
Labels: glyos, kabuto mushi, onell design, robo force
Newer Posts Older Posts Home
Subscribe to: Posts (Atom)