The Origin of the Nazarran 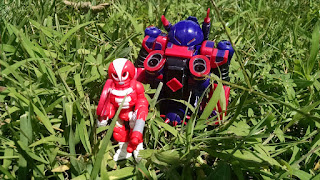 The forces of Darkness comb the jungle planet, backed up by the power of CRUEL the DETONATOR...

It was with great disappointment that NAZGAR the TYRANT learned of the defeat of the Darkness Soldiers by MAXX ZERO and his ROBO FORCE on the jungle planet of the HUNTER ZEROIDS.
The Zeroids, his greatest enemy...those who had taken his flesh and blood from him....their reappearance did not bode well for Nazgar's long-term plans. Even with his new body, fueled by one of the Zeroid's own Z-CORES, Nazgar still felt the fear which had creeped into his soul during the hundreds of years he was previously trapped in a small meti-plex jar. It could be no coincidence that they were seen again so close chronologically to when Maxx Zero appeared on Zeton - in a Zeroid Exploration Module to boot.
If Commander Zogg still functioned somewhere...
Nazgar resolved himself. Was he not the subjugator of worlds? The lone warrior in a crusade against the false gods of a thousand worlds? Maxx Zero - the Robo Force - the Zeroids - they were only problems to be solved.

Nazgar left ZETON in the care of Battlestar the Guardian while Hun-Dred recovered from the Battle at Futura One. He would infiltrate the Zeroids using the transformation capabilities of his new form, in a new body lost to legend and discovered by the Cult of Dred - a "Super Zeroid".
At the same time, he sent Cruel and Brutal to the jungle planet with a simple mission: find and capture a Zeroid...for a blasphemous experiment. 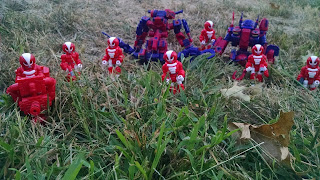 Commanding a literal army of Darkness Soldiers, Brutal and Cruel stalk their prey with the dark forces at their command! 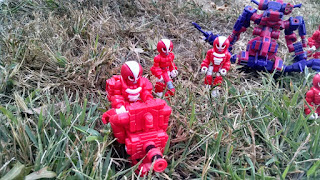 The terrain of the jungle planet varies, necessitating the use of Hover Tanks for some of the Soldiers. 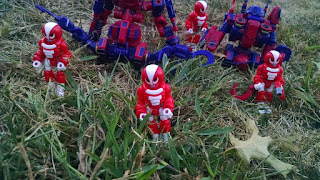 Immense foliage hides the energy signatures of the Zeroids. 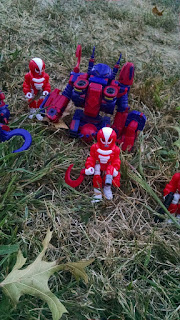 Cruel's silent form watches over the Darkness Soldiers. He supplies a special weapon to the commander of the Darkness which will be able to stun the Zeroid, should they find one. 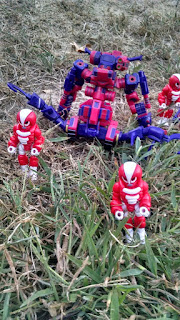 Brutal sings a ridiculous tune about "devil Zeroids in the tall grass" as he tears up the earth with his hooked arms. 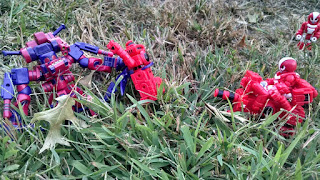 A Zeroid darts out from its hiding place, but Brutal moves with unearthly reflexes.
"I've got one, Cruel bay-bey!" Brutal exclaims.
The Darkness Soldiers rush over, weapons at the ready.
A Magnet Blaster shot knocks one Soldier unconcious.
The hover tank moves into place, blasting the Hunter Zeroid with incredible concentrated magnetic force.
The shock sends the Zeroid into a powered down state.

Now the experiment can begin.

With the Zeroid stunned, Cruel signals through his incredible communication antennae with his dark master, Nazgar.
A short time later, a Darkness Soldier bears witness to the technological desecration to come. Nazgar has arrived! His brain rises from the shielding on top of his body, no longer stuck in a jar due to the infusion of Z-Core energy and Manglor blood! 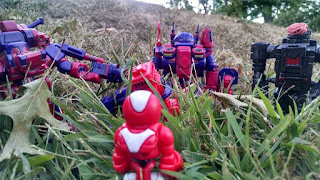 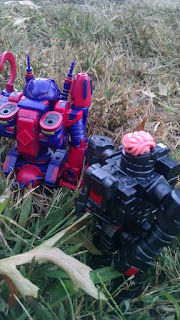 Though Cruel did not speak, Nazgar could sense that his silent warrior enjoyed the encouragement. 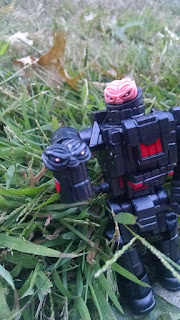 From his techno-pack, Nazgar draws a biological horror - the Nazarran, a mass of tissue derived from his own superior restructured genetics. Its programming is known only to Nazgar, but it surely does not carry good tidings for the Zeroids 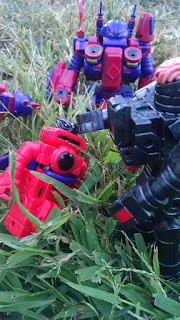 The creature is attached, a secretion of biological rust agents dripping onto the metals of the Hunter Zeroid. It digs into the casing that holds the brain mechanisms of the Zeroid, attaching itself deeply, learning the secrets of body configurations, weapon capabilities.
Long dormant self-defense mechanisms take over, erasing the mind of the Zeroid before secret memories can be obtained.
The machine and the flesh become one. 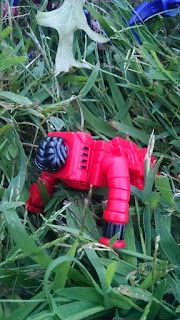 In its final moments, the Hunter Zeroid awakens, feels the pain of the Nazarran digging into its circuitry - whatever the approximation of pain the long-ago First Zeroid programmed into his progeny was equivalent to. His final thought before the creature and self-defense programming erased his mind, his personality, his soul forever was of ZEMO THE HUNTER. The Zeroid made a wish...a wish that his Zeroid patron would avenge this blasphemy against mechanical life. 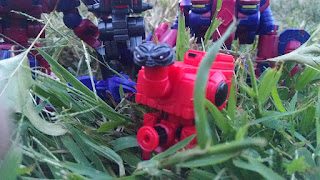 The creature finished the changes in the body of the Neo Zeroid, creating a mobility system for it to move. Programmed with hate on a biological level, the Nazarran use Zeroid technology against the Prime Zeroids in a quest to subjugate the mechanical beings of the universe! 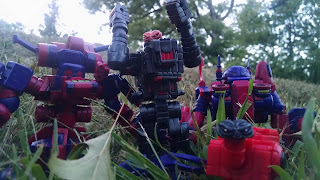 Nazgar and his warriors celebrate the blending of flesh and machine!

Will they be able to turn the tide against Maxx Zero and the Robo Force? Stay tuned! 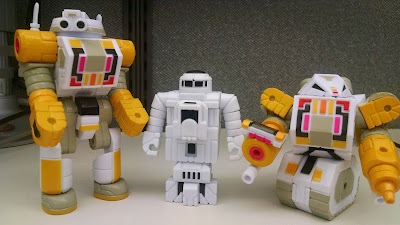 Thank you to all of the fans who supported our most recent release of Robo Force, Zeroids, Mordles, and Star Team characters!
You have many choices for your collectible needs, and each and every purchase is appreciated more than you can know.
A few fans had asked for a pic of the Maxx Zero build possible with the Sentinel kit, so check out Protector Maxx Zero above!
The Nazarran and blank white kits are low stock so get them while you can.

And do not despair, supporters of the Cult of Dred...though the Robo Force has once again beaten the Darkness Soldiers, the Darkness shall Fall again...

Ah, a special thanks to Matt Doughty of Onell Design for once again allowing the Robo Force to live again. Can't do it without you, my brother.
Posted by John K. at 2:27 PM 1 comment:
Email ThisBlogThis!Share to TwitterShare to FacebookShare to Pinterest
Labels: glyos, robo force, thank you
Newer Posts Older Posts Home
Subscribe to: Posts (Atom)