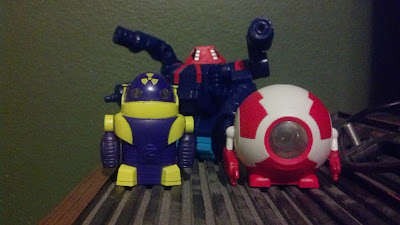 Actually, that's the same thing my business partners asked me!
In the end, it comes down to supporting things you believe in.
Zibits is a line I don't think received a fair shake at retail. It was generally in the third or fourth aisle at TRU - and very few other brick and mortar stores carried them outside of Barnes and Noble, at least that I saw in person.
Essentially, you have the spiritual successor to Zeroids, Star Team, and Robo Force in Zibits.
In the 60s, Zeroids had the gimmick of being motorized and and spring-action arms, as well as a function for each robot to have a purpose for their motorization. Zogg the Commander took this further, having light up action and magnetic LAZER BEAM activation ability. Beyond this, the robot designs are very American at the time - long lines. Almost automotive paint detail and stylization.

In the 70s, Star Team basically had a stripped down version of Zogg in the Zeroid Scout to capitalize on Star Wars, specifically R2-D2. There are no power actions - a very basic toy. More real than the style of the Zeroids.

In the 80s, Robo Force has the infamous suction cup and huggy arms - perhaps ludicrous alone, but in reality taking advantage of pneumatic technology which was "hot" in the 1980s and a logical extension of where Zeroids had started. Rocks and Bugs and Things would utilize similar gimmicks. The robots are smaller than Zeroids in stature, but bulkier to reflect how we thought of robots at the time.
Arguably, the 90s had Z-Bots - robots in a nano scale. Smaller, more compact, influenced by Japanese designs such as Transformers which had dominated the 80s.
And now, Zibits. What would a Zeroid in the year 2010 have as his power actions? If not magnetic bits, surely remote control via wireless device to finally accomplish what the 60's toy wished it could do. Smaller, more compact robots; light and sound...that's what I felt when I saw Zibits in stores. These were what modern Zeroids would be.

Zibits ran successfully in the US for one full series, but distribution on later waves was spotty. I'm still looking for three of the 1.5 wave releases myself; they may have only been overseas releases. Series 3 recently started hitting Radio Shack, but only six of the figures were released. I had the opportunity to buy in on a small quantity of the second six figures and bring them to you guys at a pretty good price, so I said "what the hell?"
We'll take a chance and see if we can't bring these neat little guys to some more eyes than they had at mass retail...just like their spiritual predecessors.
Posted by John K. at 3:14 PM
Email ThisBlogThis!Share to TwitterShare to FacebookShare to Pinterest
Labels: robo force, star team, toyfinity, zeroids, zibits