The Return of the Greatest Villain from ALL of the 70's Space Franchises - ROBO FORCE'S THE KNIGHT OF DARKNESS! 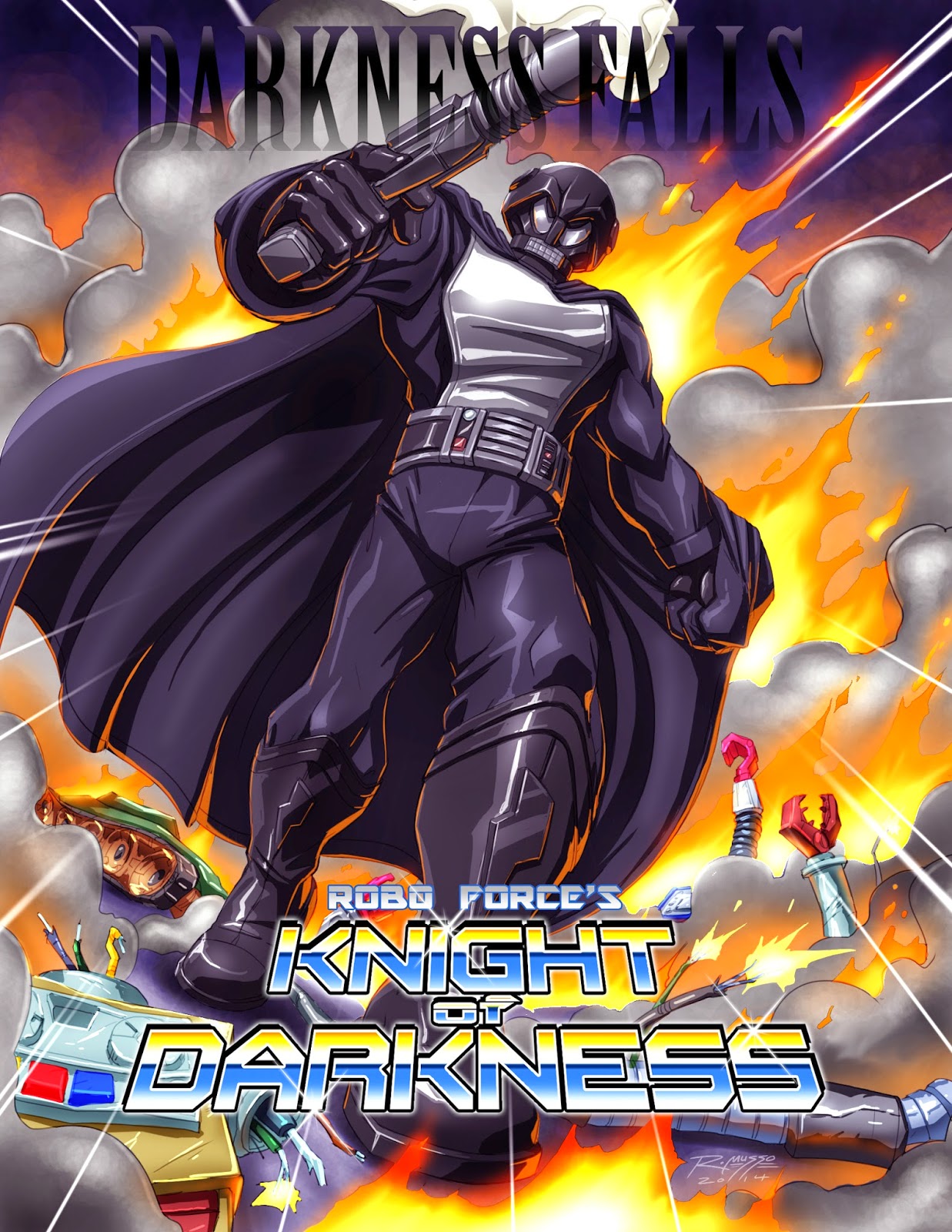 April 1st, GROVERS MILL NJ - Somber. Powerful. A grim-masked menace that strikes terror into the bravest heart. A perfect bad guy for long hours of imagination and excitement. - Ideal Toys Catalog 1978 So read the official description of the awesomest bad guy from the greatest space franchise in the 1970's, Ideal Toys' SPACE TRAVEL AND RECONNAISSANCE (S.T.A.R.) TEAM™ - THE KNIGHT OF DARKNESS™. And now, HE'S BACK.

Originally created by a nameless Ideal executive in the late 70's as a way to revive the long-dormant IDEAL'S ZEROIDS WORKER ROBOTS OF THE FUTURE™ franchise and their own SPACE TRAVEL AND RECONNAISSANCE (S.T.A.R.) TEAM™ franchise of the early 70's, Ideal Toys' SPACE TRAVEL AND RECONNAISSANCE (S.T.A.R.) TEAM™ was a completely original concept revived by Ideal because they knew kids of 1978 were dying for some awesome space-based action figures for some reason. With impeccable sculpting prowess, THE KNIGHT OF DARKNESS™ was formed from the imagination of one of the artisans of Ideal Toys to provide the key figure in the franchise which the heroic ZEM-21™and ZEROID SCOUTS™ could battle in endless original adventures throughout a child's imagination. Along with their human friend KENT AND HIS COSMIC CRUISER™ and their S.T.A.R. TEAM SPACE HAWK™, ZEM-21™ and the ZEROID SCOUTS™ battled THE KNIGHT OF DARKNESS™. His magnificent black and silver uniform encased THE KNIGHT OF DARKNESS™ in a cloud of mystery, as his futuristic weapon cut a path through the toy shelves of the time, destroying all the cyborg and military heroes that were his competition in the 12-inch action figure market. But THE KNIGHT OF DARKNESS™ had one problem - he was just too evil and imposing for the children of the time, who had never seen such an evil and imposing character in any medium ever. He's just so evil and imposing and dark and knight-ish. So after only one series, Ideal Toys' SPACE TRAVEL AND RECONNAISSANCE (S.T.A.R.) TEAM™ disappeared from the shelves, never to return. Or so everyone thought.

Now, after multiple years of complex legal matters, Toyfinity Toys has removed Ideal Toys' SPACE TRAVEL AND RECONNAISSANCE (S.T.A.R.) TEAM™ from the scrapheap of toy history and they will now be part of the revamped ROBO FORCE™ franchise. Toyfinity CEO and Owner John Kent said, when reached at his new mansion in Grovers Mill, NJ, "I couldn't be happier with the acquisition of Ideal Toys' SPACE TRAVEL AND RECONNAISSANCE (S.T.A.R.) TEAM™, which will now be known as ROBO FORCE'S SPACE TEAM™. I mean, Starriors wasn't available and I wasn't paying six more figures for the rights to MANTECH™ and STARCOMM™, so this was the next best thing, I guess. At least until we finish up the DOCTOR DETROIT™ license."

To mark the occasion, Toyfinity Toys has prepared a special piece of artwork showing ROBO FORCE'S THE KNIGHT OF DARKNESS™ dispatching some type of robotic entities and reclaiming his territory on collectors' shelves, in a piece done by Robby Musso, acclaimed artist who has worked on many, many comic book projects. Additionally, ROBO FORCE'S ZEM-21™ and ROBO FORCE'S SCOUTS OF ZETON™ will appear in an all-new ROBO FORCE'S SPACE TEAM™ comic book on Toyfinity.com to continue their adventures in the cosmos later in 2014. The very first ROBO FORCE'S THE KNIGHT OF DARKNESS™ action figure will appear later in 2014 utilizing the revolutionary GYLOS™ System from Onell Design , with ROBO FORCE'S ZEM-21™ to appear in 2015, maybe.

ROBO FORCE'S KNIGHT OF DARKNESS™ - dare you add him to your shelves? Your other toys will be terrified as #DARKNESSFALLS.

About Toyfinity Toys, LLC Toyfinity Toys, LLC is a New Jersey-based toy company who legally acquires the rights to old franchises and then makes new toys from them. Buy some at Toyfinity.com. Trademarks are legal right and property of the various companies that own or owned them, copyright the years they were valid. No one reads these sections anyway, right? Special thanks to PlaidStallions.com for their scans of the Ideal 1978 Catalog.
Posted by Nathan at 7:27 PM
Email ThisBlogThis!Share to TwitterShare to FacebookShare to Pinterest