Breaking down the ROBO FORCE's KNIGHT OF DARKNESS press release... 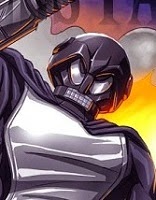 Now that you guys know Robo Force's the Knight of Darkness (which I have to state every time at the start for trademark reasons) is the real deal, here are some of the fun things from the fake press release I put out on April 1st:
- I said I was from Grover's Mill, which is more famously known as the place where Orson Welles said the Martians landed during "War of the Worlds". Thanks to BUCKAROO BANZAI for reminding me of this.
- a lot of the verbiage - "a grim-masked menace..." and so on - comes from the Ideal catalog description of the Knight.
- "the awesomest bad guy from the greatest space franchise" - I really wanted to make sure people knew it was fake from the first paragraph. No one should take a "serious" press release seriously that has the word awesomest in it, unless it is about ENCINO MAN: GENERATION TWO.
- also, "he was just too evil and imposing for the children of the time, who had never seen such an evil and imposing character in any medium ever" makes joking reference to another space-based character that became famous in the seventies for his evil. (Yes, I'm referring to Mork from Ork)
I was just really riffing with the hyperbole throughout the release.


- part of the fun was just throwing a TM after EVERYTHING. Speaking of which, sorry - I do not have the rights to "Starcomm". And "Robo Force's Space Team" is such a horrible knock-off styled name that I had to write that in there. But it was actually considered as the name when we thought S.T.A.R. Team wasn't available.
- I do actually dream of acquiring the DOCTOR DETROIT™ license.

- I misspelled "Glyos" as GYLOS. It's a common error, but I wanted to specifically call it out in the release.

The first release from Toyfinity's S.T.A.R. Team will hit your shelves this year!
Posted by John K. at 9:39 PM
Email ThisBlogThis!Share to TwitterShare to FacebookShare to Pinterest
Labels: knight of darkness, star team, toyfinity