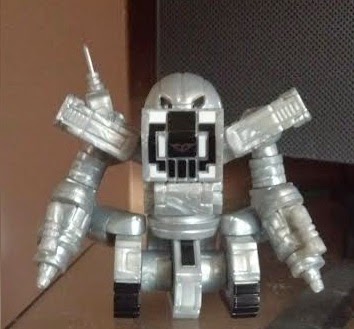 Thanks to all the Robo Force and Mordles fans who came out and made some purchases over the last few days! It is much appreciated.  I know that you have a ton of potential fun things to purchase with all of the Kickstarters and exclusives this time of year, so the support you show does not go unnoticed.
As of this writing, the entirety of US-based orders through Tuesday have been shipped out, with the non-US orders just about ready to go and ship out on Wednesday. Combined shipping refunds will be later this week. I can't wait for you guys to get these figures in your hands - a lot of work went into this round on all sides of the equation, and I'm particularly proud of the Vanguard figure. Make sure to take it outside and look at it in the sunlight - it becomes almost a completely different figure in the ever-lovin' bright light. Getting to update the classic Star Team logo was also a blast.
You'll see some fun things pop up on the blog later this week - just because the release has occurred doesn't mean the fun is over!

On another note, there are a few things that have been on my mind that I'd like to share with you.

I find that working on toys is much like working on movies.
Very rarely are you at the start or the end once you start the machine rolling.
Time is a constant enemy. Every day you think about your products and what has to be done to get things ready in time (usually months before any other humans will see what you are working on) and there's a continuous cycle of money coming in and going out as the orders and bills roll in. By the time the product you worked on three months ago comes in, you are already working on the next products; the critical decisions are being made on the next product while the current product is shipping; and you have to take guesses as to what people will want a few months down the road while trying to process the information gleaned from the current sales. This is barring any glitches in the process.

With this in mind, I'm going to take this opportunity to let you guys know that there will not be a Robo Force release in August, and potentially not in September either. Mordles will see one release in August, with September still to be determined.
It has been a busy and chaotic year so far - I recently wrapped production on another movie, and there was a slight delay with this product release that pushed us into July. These occurrences have combined to push the next Toyfinity release (after the August Mordles) into September, possibly October at this point.

In the meantime, make sure you check out the next Onell Design release on Sunday the 27th!
It is the seventh anniversary of Glyos, and whatever they have planned, it is sure to be a blast.
Posted by John K. at 10:43 PM
Email ThisBlogThis!Share to TwitterShare to FacebookShare to Pinterest
Labels: thank you