Planet X'Arb'ea.
A harsh desert planet home to one abandoned former scientific outpost of the Star Team - Ranger Division.
Maxx Zero and the Robo Force have been following the path of the Prime Zeroids ever since meeting Assassin and Striker on Diavolus.
It is Maxx's belief that Zintar the Explorer holds some long-lost knowledge about ZETON and how Nazgar can be defeated for all time, leading the Force on a quest throughout the stars.
After leaving the jungle planet of the Hunter Zeroids and adding Arjox to the team, Maxx continued upon the path he felt would lead to Zintar.
It was along this path that the planet X'Arb'ea lay.
Sensors in the Star Hawk notified Maxx that unique metals from ZETON were housed in the scientific outpost.
Imagine his surprise when he found hundreds of half constructed Zetonian robots in storage at the facility, coated in a base white alloy... 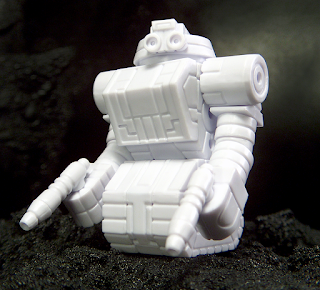